Was Chick-fil-A Wrong About the Salvation Army? 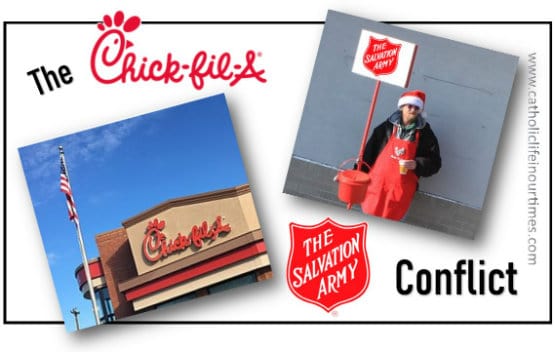 Fast food franchise, Chick-fil-A, became an overnight sensation for its family pleasing menu and friendly staff. Christians continue to appreciate their policy of closing on Sundays. According to a video, published by the fast food chain,

“Closing on Sunday is a practice established by our founder Truett Cathy that we still hold true today. It’s not about being closed. It’s about how we use that time.”

This sentiment, like the respect paid to Sunday by Hobby Lobby, won the hearts and spirits of Christians throughout the country. Finally, there was a glimmer of hope from these businesses portraying Christian values. However, we must consider that there is often more to the story. For, example, should we really be upset by the recent news that Chick-fil-A stopped donating to the Salvation Army? Let us delve into the big picture.

For years, the fast food chain grew exponentially. Yet, it did not take long before the secular world began its unrelenting attack. Apparently, support for marriage – natural man and woman marriage – presented a worthy reason for a boycott. Although, the fast food chain never discriminated against anyone, in both service and employment, it was not good enough for the haters. It became essential to call for an all-out war against them because of their choice of charitable works. Never mind that Chick-fil-A showed no animus toward those with a differing moral compass. Supporting traditional values became a focal point for an egregious dispute.

As the hatred, boycotts, and falsehoods escalated so did the fervent support for the Chick-fil-A brand. Mothers loaded up their minivans and fed their children. Church groups and conservatives used their catering services. Christian publications sang their praises. The loyalty garnered by standing up for morality found the chain enjoying considerable free publicity. In turn, Chick-fil-A grew to become the 3rd Largest US Restaurant Chain.

The Betrayal (or is it?)

Then the shocking news hit the hearts of the loyal battalion of Chick-fil-A fans. The franchise made the decision to change the face of their charitable contributions. News outlets began reporting that Chick-fil-A will no longer donate to anti-LGBTQ organizations. The shocked outrage from loyal fans became palatable.

On the surface, this news might appear to be more radical than it really is. Aside from the gloating headlines from secular sources, there are some important details to consider. First, is the fact that the Chick-fil-A Foundation is revamping its entire charity commitment schedule. Instead of a multi-year plan, the group will now reassess donations on an annual basis.

“Additionally, the Foundation will no longer make multiyear commitments and will reassess its philanthropic partnerships annually to allow maximum impact. These partners could include faith-based and non-faith-based charities.”

Additionally, we might do well to remember that this is not the first time that the brand has backtracked from its giving model. According to Fox News Chick-fil-A stopped giving money to several conservative Christian groups in 2012 following backlash to CEO Dan Cathy’s comments opposing gay marriage. It seems that those in charge may have feet of clay after all.

On, the other hand, perhaps their new model of giving to local food banks on an annually assessed basis is worthwhile for its focus on subsidiarity. In giving to the needy locally, there is less chance of misappropriation of funds. While it may be disappointing to see donations going elsewhere, there is also the issue of thorough vetting of beneficiaries of the past.

My preliminary reaction to the news of a change in funding was disappointed outrage. How could Chick-fil-A bite the very hand that feeds it? After all, conservative customers undoubtedly represent a significant part of their success.

These exceptions portray a troubling contradiction to their professed stance on the “sanctity, unique dignity and respect” due to the “image of God” found in our unborn brethren. Their official statement further relays that…

As noted in medical texts, many forms of birth control are abortifacients. Therefore, the statement above does not portray a pro-life stance. Further, Humanae Vitae clearly teaches that the use of any form of contraception or birth control goes against the teaching of the Church.

In a previous article published by Catholic Stand we find further indictment of The Salvation Army. Their ties to Planned Parenthood disqualify them as a suitable recipient of donations from Catholics.

Simply considering “all the good they do” is not enough to excuse or set aside this compromise of pro-life principles.

No Donations to The Salvation Army

Considering the anti-life stance of The Salvation Army, I have reevaluated my initial reaction to the news that Chick-fil-A no longer donates to their organization. In addition, The Salvation Army has other problematic views that affect Catholics. There is a compelling incompatibility in regards to faith.

Tim Tassopoulos, president and chief operating officer of Chick-fil-A revealed in a statement that, “No organization will be excluded from future consideration — faith-based or non-faith-based”. The statement went on, “Through these initiatives, Chick-fil-A Inc. and the Foundation will provide approximately $32 million in total cash gifts in 2020”.

In the future Chick-fil-A will work exclusively with organizations that focus on education, homelessness and hunger. Junior Achievement USA, Covenant House International are included in next year’s budget. The foundation is also donating $25,000 to local food banks.

Although it is certainly troubling when an organization or business appears to stray from the moral high ground, sometimes there is more to consider. There is no doubt that we live in a morally tumultuous era. The lines between secular and moral are ever more intertwined. The confusion caused by this creates a difficult task of discernment for the faithful. Yet, we cannot allow the weaknesses of others affect our peace. Perhaps the choice made by Chick-fil-A was poorly discerned. Yet, the elimination of donations to The Salvation Army, in deference to a more local effort is an admirable option. Sometimes there is no easy answer.