Excommunication Or Not
That is the Question 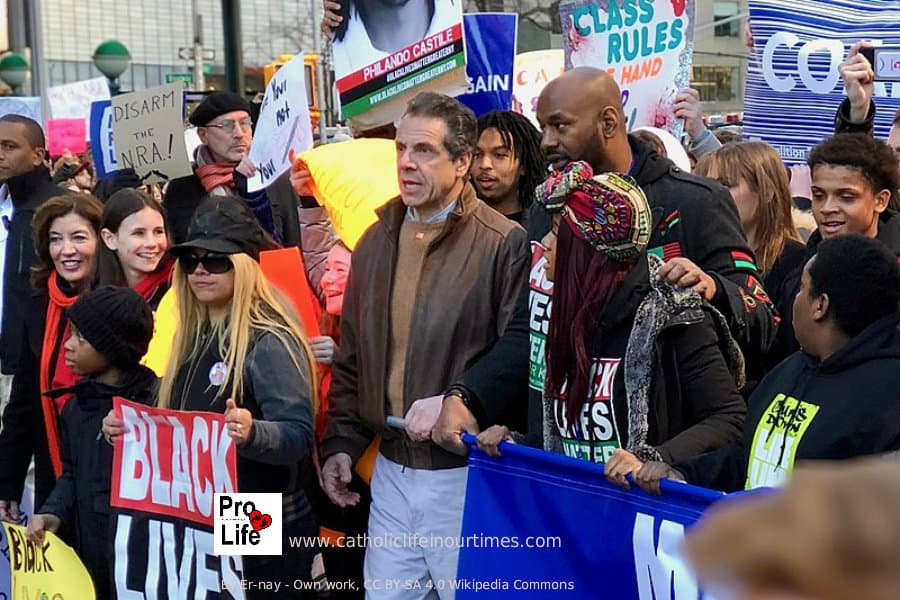 When House Speaker Nancy Pelosi made frequent public statements at odds with Catholic teaching, the pro-life Catholic public was outraged at the scandal she publicly professed. There were calls for her excommunication. She even called abortion ‘sacred ground’ when asked about her opposition to a bill banning late-term abortions’.

“As a practicing and respectful Catholic, this is sacred ground to me…. This shouldn’t have anything to do with politics.”

Now there is an even more egregious example of scandal by a self-proclaimed Catholic politician. NY Governor Andrew Cuomo promoted, signed, and celebrated a new law allowing unlimited abortion throughout all 40 weeks of pregnancy. That means up to birth! Those who previously paid no heed to this reality, actually already legal in 7 states, have now awakened. The reaction from the public is widespread and loud. As a result, the bishops of our country are receiving thousands of requests, no demands, for Cuomo’s excommunication for this horrific law and its celebration.

Yet, the reaction to this requested medicinal application toward Cuomo has met with mixed opinions by his own bishop and others across the land. Cuomo’s own shepherd, Bishop Timothy Dolan of the Diocese of New York City, says that excommunication “should not be used as a weapon.” A neighboring bishop has a slightly harder line.

“Excommunication is a last resort, and as the governor continues to distance himself from our (Catholic) communion, it may unfortunately result in that.” Bishop Edward Scharfenberger of Albany

Other Bishops Speak Out

Those with stronger opinions include Bishops Richard Stika of Knoxville and Joseph Strickland of Tyler. A  recent tweet from Stika read:

“I’m with Bishop Stika. I’m not in a position to take action regarding legislation in New York but I implore bishops who are to speak out forcefully. In any sane society this is called INFANTICIDE!!!!!!!!!!”

To which Stika replied:

“Enough is enough, excommunication is to be not a punishment but to bring the person back into the Church. It’s like medicine for them. But this vote is so hideous and vile that it warrants the act. But thankfully I am not in that position. Very sad.”

In addition, Canon Lawyer Ed Pentin, weighs in to disagree with those who fail to recommend the measure.

“Many people are pointing out that Cuomo has not violated c. 1398, which provides a penalty of excommunication for the procurement of a completed abortion. However, c. 1364 provides the same penalty for heresy—“the obstinate denial or doubt after baptism of some truth which is to be believed with divine and Catholic faith.””

In order to arrive at the correct measure to take, some details need to be considered first. In fact, an explicitly active rejection of Church teaching is not necessary. If one publicly and consistently promotes, defends, and celebrates abortion then this is enough for excommunication to be an option. Especially in a case such as this. Cuomo has already received numerous letters of warning from both Bishops Dolan and Scharfenberger.

“By the straightforward application of the canon on credenda teaching, Cuomo can be said to have committed an external and imputable delict of heresy, and to have incurred an excommunication which can, for the public good of souls, be declared by his bishop, be it Dolan or Scharfenberger.” Ed Condon, canon lawyer

Further, Condon makes it clear that he is “not arguing that any Catholic politician who has supported or voted for pro-abortion legislation can ipso facto be termed a heretic. Gov. Cuomo’s consistent and vocal support for this particular legislation, his unique role in enacting it, and his flouting of the clear and public admonitions of two bishops who can claim jurisdiction over him make his case unique”.

What Is Necessary for Excommunication?

In seeking out the sentence of excommunication, certain teachings must first be considered. The Catholic Church has a special set of beliefs that encompass acts that are intrinsically evil. According to the United States Conference of Catholic Bishops (USCCB):

“There are some things we must never do, as individuals or as a society, because they are always incompatible with love of God and neighbor. These intrinsically evil acts must always be rejected and never supported. A preeminent example is the intentional taking of human life through abortion.”

Other intrinsic evils include euthanasia, human cloning, destructive research on human embryos, and homosexual marriage. These beliefs are a part of the Dogma* of the Catholic Church.

According to the   the “Church’s Magisterium exercises the authority it holds from Christ to the fullest extent when it defines dogmas, that is, when it proposes, in a form obliging the Christian people to an irrevocable adherence of faith, truths contained in divine Revelation or also when it proposes, in a definitive way, truths having a necessary connection with these”. Catechism of the Catholic Church

*Unlike discipline – a practice that can be changed (think abstaining from meat on all Fridays of the year) – dogma is definitive and can never change.

Another Option of Excommunication

An alternative recommends that persistently pro-abortion legislators, directly involved in lawmaking, are already excommunicated by virtue of heresy. This is in reference to excommunication latae sententiae – meaning ‘sentence already passed’ in Latin. Latae sententiae refers to an instance where an individual, himself, incurs excommunication without the usual Tribunal trial or any public announcements. This type of excommunication occurs as the result of persistent public sin, scandal, or heresy.

If this is the case, then the sentence has already been brought. In humility, we need to consider that the laity has no right to this information from a procedural perspective.

However, it would seem that since this sin is so publicly scandalous, that the reprimand be public as well. This would serve to give a public correction. In addition, it would be an example those who have been swayed toward the acceptability of being a Catholic in good standing while refusing to uphold Church teaching.

Where Does This Leave Us?

Clearly this question cannot be answered by the laity. It must be considered that a sentence of excommunication is remedial. The Church does not intend it as a punishment. It is given in the hope that the sinner return to full communion with the Church. While it may be a natural human desire to see the sinner punished, we must refrain from reaching above our own authority. The Church provides excommunication as rare, prudential aid for healing sinners.

Unfortunately, there is much disagreement among the clergy. In response, I submit that all people of good faith begin to attack this ongoing scandal by taking it to fervent, frequent prayer. Thus armed, let us raise our (respectful) voices to the clergy. There is a real need for us to become spiritual warriors, strengthened by grace. Plead with God Almighty, educate neighbor and family, and encourage bravery among the clergy. Take to the streets, to your neighborhood, to your church. Become a beacon of the Light of Jesus.

The final judgement, however, belongs to God alone. In the long run, repentance and return of the lost sheep is the Christian goal. Jesus made that clear.  His Will be done!