Marriage, A Matter of Grace
Reflections of a 17-Year-Old Bride

Spoiler alert: My husband and I are celebrating 45 years of marriage today (November 29, 2019). I write this perspective, then, from a position of decades of experience. As we are now both in our early 60’s, we have lived through several seasons of an ever-evolving society. Our childhood was a time of coming home when the porch light came on and activity rather than screen time. I confess, however, that we have evolved ourselves – fitting neatly into smart phones and social media. Although there have been changes, both in practice and perception, the one key ingredient to the continued success of our marriage remains. Grace is freely given by God and we have both been blessed with a loving Creator. He lovingly leads us through the seasons of our lives.

Marriage Is Under Attack Today

The society leading up to our marriage, however, is not reflected to today’s culture. The couples who are contemplating marriage today live in an ever-falling societal spiral. Witnessing the constant attacks against the institution of marriage leaves us all gasping for a moral resolution. Surely, punishment similar to Sodom and Gomorrah is waiting in the wings for our fallen world. It is not even necessary to list the many abhorrent sins against Holy Matrimony of our modern times. Unless you are hiding under a rock, you are at least marginally aware. As Catholic Christians it is our duty to ‘do something’, but what?

What we need is a return to grace in marriage because God’s grace is the only resolution. We all know that marriage is not easy. As the two, who have become one, live past the ceremony and reception, they experience the reality of life. What holds the bond together for eternity is an influx of God’s grace in marriage.

Grace in Marriage Then 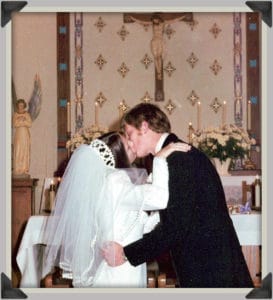 How do I presume to insist on knowing so much about grace in marriage? Let us take a quick trip through the eyes of a seventeen-year-old bride:

These past 45 years have flown by and I cannot really remember not being married. We have had our triumphant ups and our horrific downs. I have survived breast cancer (14 years and counting), in large part due to my knight in shining armor/court jester and the awe-inspiring prayers of friends from around the world – and of course, the grace of God. If I had to sum up the reason for the success of our marriage in one word it would be, not love (a very close second), but GRACE. Our love is strong and has sustained us, but the real life-blood of our union is the Grace of God. He has been there, through it all, and for that, we are deeply thankful! 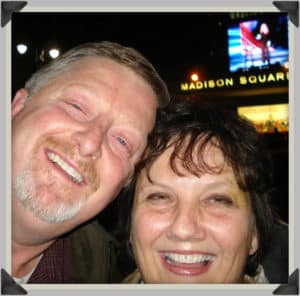 By no means are we past the need for grace in marriage. We do, however, recognize our God-given priorities – God First, Spouse Second, and Children Third.  Although we have mellowed, there are still the occasional bouts of discord. Our joint prayer life sustains us and we walk, together, strong in faith and grace.

I love you, Richard Joseph Jones! May we have many more years growing old(er) (and Eternity).