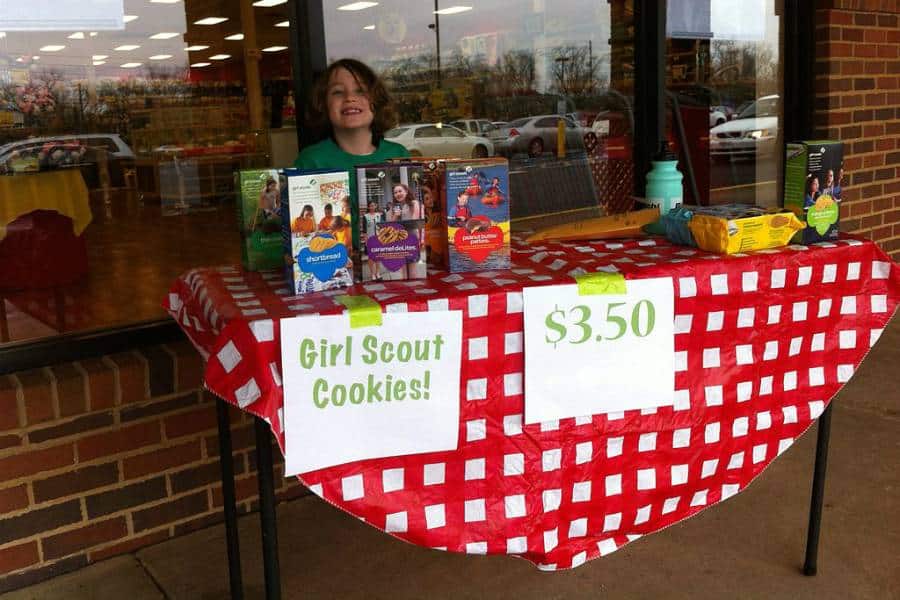 They come to your door, or stand outside Wal-Mart, fresh-faced, smiling little girls, selling their cookies. It’s an image as American as apple pie, yet the Girl Scout (GS) cookies may finally be crumbling. Not because of anything the girls have done, but because leadership has colluded with the devil’s handmaids.

For many years now, faithful Christians have begun to notice feet of clay in the foundation of the Girl Scouts of America (GSUSA). And even amid the certain danger of exposing the innocent to the nefarious, denials are given, excuses are made, and a blind eye is turned by the Girl Scouts (GS), by churches, and even by parents. Let’s begin by showing some disreputable connections.

Birds of a Feather – Associations Matter

World Association of Girl Guides and Girls Scouts (WAGGGS):  Don’t be fooled into thinking your Girl Scout’s dues go solely into local coffers. GS helped found WAGGGS and makes up 25% of their membership – paying approximately $1 million in dues, per year. What’s done with that money isn’t up to you or your daughter. What it does do, is to free up a huge chunk of cash to use toward things such as promotion of promiscuity, birth control, and abortion—worldwide.

Planned Parenthood (PP):  GS associates and co-ops with Planned Parenthood. No matter who denies it, the  pictures  speak more than a thousand words. Add that this is becoming more  blatantly  common  and deniability becomes less feasible and the deception more apparent. Our little girls are becoming a demographic targeted by feminist activists, such as Marlo Thomas and Amy Richards. This was evident in their recent promotion for the pro-abortion documentary,  MAKERS. With this much evidence, turning a blind eye is now the only option for those who still refuse to see the clearly outlined facts.

Josh Ackley, a past Media Relations and Spokesperson for GSUSA: As we drill down further, we discover Josh Ackley who was charged with setting the course for promoting  “positive images of women and girls”  through the GS  Healthy Media Campaign. As a member/founder of the defunct homopunk band, “The Dead Betties,”  images  of him are more than a little disturbing. According to Wikipedia, they are profiled in the book  Homocore: The Loud and Raucous Rise of Queer Rock.  Currently, Ackley is still employed by GS USA in another capacity.

Kelly Parisi, current Media Relations and Spokesperson for GSUSA: Past Vice President of Marketing and Communications  at MS Foundation for Women, who  according to  their own website, contributed more than $1 million to abortion advocacy in 2012. According to a  Breitbart.com  article, “it was during her tenure at the Ms. Foundation that Parisi joined in a national campaign to punish the Susan G. Komen Foundation for trying to defund Planned Parenthood” due to pro-life concerns. Continued selection of this type of immoral activist should be enough to scare off any discerning parent. What could possibly excuse employing such persons?

The denials and deception continue, however. As you can see from a Girl Scout  Q & A  page, creative wording and semantics play a large role in calming parental fears. Although  individual  girls don’t hold membership in WAGGGS, their larger troop (through association with GS USA) does. Although  individua l dues don’t go  directly  to WAGGGS or their diabolical efforts favoring abortion and such, each smaller entity feeds into the larger one. The fungibility of funds creates a means by which every individual is a part of the larger picture. Money makes its way from your daughter, to her troop, on to GSUSA, and then to WAGGGS in the form of dues—said money now goes into the larger coffers which fund immoral activity. There, the connection has been made!

Investigation, But is it Enough?

Many  groups  exist today, in an effort to keep our girls safe from unholy alliances and those who would try to sully their purity. Yet the effort is slow to take off. The USCCB  has become involved and have been in  dialog  with GSUSA for almost two years. Individual priests and bishops have taken steps to  remove GS  from their parishes and dioceses. But there is also much foot dragging. Why? It’s a question I ask myself often. Yet the facts speak more loudly. How many concerned parents have called their youth director, their pastor, their bishop? Surely there is an urgent need to remove the GS from reaching our daughters. Their very moral development is at stake. And once that line has been crossed—especially when it’s way too early—that bell just can’t be unrung. Is it really worth the chance?

“We must exercise a critical vigilance and at times refuse funding and collaborations that, directly or indirectly, favour actions or projects that are at odds with Christian anthropology.” Pope Benedict, Address to the Pontifical Council Cor Unum (1-19-13)

Let’s face it; no matter how small the frog, he makes a ripple in the pond. We don’t have to physically hand money to an abortionist to be complicit in promoting abortion. When we cooperate, in any aspect of a questionable organization, we are a part of the machinations of said group and its activities. Once we become aware of illicit alliances, we become culpable. Isn’t it time to take the abundance of facts we have been given and make the morally sound choice? No amount of denial, creative talk, or wearing of blinders is worth risking the honor of the daughters we have been given. Stand up for their innocence and purity. If we don’t, who will?

Girl Scouts:  For many, the benefits of scouting are woven into the very fabric of their being. This scandalous outrage doesn’t mean you can’t offer your daughter a scouting alternative. Here are a few options:

Cookies:  Even those tempting, once a year, guilty pleasures have an alternative. With a bit of shopping, I’ve found my favorite Samoa cookies at the local Family Dollar store, under a different name, of course. Keebler’s  Coconut Dreams  are also a newly available alternative. Other varieties, such as Thin Mints, were also on the shelves of stores. In perusing Pinterest, I have also found  recipes  for making your own.

With such damning evidence and plenty of wholesome alternatives, can we afford to wait any longer? After connecting all the pieces, what possible reason can justify remaining with the Girl Scouts?

UPDATE (March 7, 2019): If you still have doubts about the Girl Scouts and abortion please read these current links Girl Scouts Gives Its Highest Award to Teen Who Organized Campaign Promoting Abortion

and New evidence: The Girl Scouts USA is an abortion-supporting organization