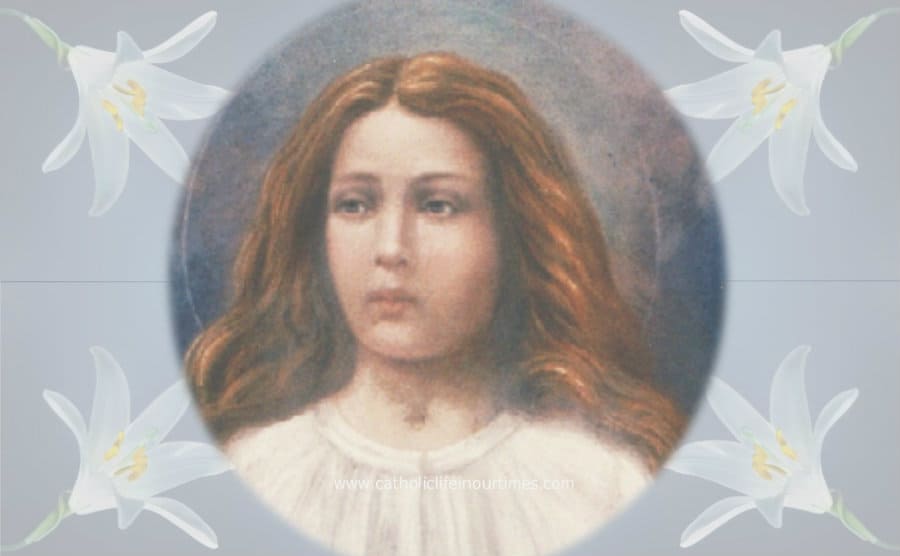 During my sixth grade year of Catholic school, Sister James Alma taught us about Saint Maria Goretti – the young patroness of chastity, rape victims, and merciful forgiveness. Although my knowledge of sexuality was immature, I felt an instant affinity for this young saint of chastity. Her story touched a chord deep within my heart. To think that someone so young would choose death, rather than submit to the sinful lust of a robust neighbor boy was inordinately stirring. That she was able to love her attacker and offer forgiving mercy was incomprehensible. Yet, fate put me in a similar experience a mere two years later.

It Happened to Me

My willowy adolescent body was no match for the virile young man down the street. I unsuccessfully fought off His forceful advances. Pregnancy was confirmed six weeks later . To be honest, Saint Maria Goretti was far from my mind during the ensuing time of waiting. This year, however, is different. In anticipation of her feast day on July 6th and the preceding Novena, my mind turns to her.

Unlike Saint Maria Goretti, forgiveness didn’t come easily. After denials from the perpetrator and his family, my family simply went into survival mode. My parents adopted the child and we continued life in the same small town. Although we avoided open animosity, relationships remained strained. It took years of life, prayer, and coping before I could even think of openly facing the reality of what had happened to me.

Sharing Can Be Mercy

Eventually, my experience became a valued tool in counseling young girls and their families. As executive director of our local Right to Life group, my ‘ace in the hole’ story was privately shared with those who could benefit. My survival and successful graduation, marriage, college, and career gave tangible proof that life doesn’t end at rape conception and fully living the pro-life stance.

However, even more time was necessary before it was possible for me to publicly share my story. Finally, in 2012, at the age of fifty-four, something that had happened forty years prior was put into printed word. It was cathartic yet nerve-wracking at the same time. Seeing the most impactful experience in my life put in print shattered the carefully crafted wall I had built. Nightmares returned and the paper thin wall of peace crumbled. Yet I moved forward, sharing and finding a comforting balm by the kind words received in response to my story.

While I have mostly recovered from the unexpected aftershock of sharing such a personal aspect of my private life, a deep dark place will remain with me. There is no hostility toward the others in this experience, only a calm ability to forgive, pray, and move on. My faith and family sustain me. I pray that others who experience such a horrific betrayal are moved by mercy and love to do the same.

What a strength of faith and will this young girl possessed! Maria lost her father when she was nine. As a result, she took charge of her siblings while her mother worked in the fields to provide for her family. In addition to caring for her own family, Maria cooked and cleaned for a neighbor and his son. This is how she was placed in the path of her attacker, Alessandro Serenelli who developed an impure attraction to Maria.

After months of crude insults and sexual advances, which Maria successfully fought, Alessandro attempted rape. In her successful struggle to prevent violation, Maria was stabbed and died the following day. The numerous brutal stab wounds became infected. Maria’s last words reflected her purity of heart and soul, “I forgive Alessandro Serenelli…and I want him with me in Heaven forever”.

The First Fruit of Merciful Forgiveness

Subsequently, Alessandro was imprisoned for his crimes against Maria. Again, her heart of mercy was revealed. After he had served six years in prison, Maria appeared to Alessandro in his cell. In the vision she was surrounded by lilies, the symbol of purity, and she spoke words of forgiveness. Maria’s act of mercy and love spurred contrition in Alessandro, allowing grace to enter his heart. After serving his sentence Alessandro lived a life of holiness. Maria’s mother also granted her daughter’s attacker pardon and made the merciful gesture of attending Christmas Mass with him. There he publicly confessed his sin and asked pardon.

Having found mercy, Alessandro eventually became a Franciscan lay brother. Before he died, Alessandro penned an open letter to the world. In it, he shared his admiration of Saint Maria Goretti.

“Little Maria was really my light, my protectress; with her help, I behaved well during the 27 years of prison and tried to live honestly when I was again accepted among the members of society. The Brothers of St. Francis, Capuchins from Marche, welcomed me with angelic charity into their monastery as a brother, not as a servant.”

In what appears to be a direct response to Maria’s wishes, he added, “…now I am serenely waiting to witness the vision of God, to hug my loved ones again, and to be next to my Guardian Angel and her dear mother, Assunta.”

Personification of Chastity, Mercy, and Love

We are all called to chastity, according to our station in life. Love enters in when we show, by our example, that we are followers of Christ. Saint Maria Goretti exemplifies all that Jesus asks of us – even to the point of loving and praying for our enemies. In her mercy and love, she spiritually embraced her attacker with forgiveness – even to the point of wishing him to spend Eternity with her in Heaven. That he shared the same wish in his final letter, shows that he accepted and understood the mercy extended to him by his little victim.

Prayers for the First Day

O St. Maria Goretti, beautiful model of purity, you defended your virginity unto your death. Even at the age of 11, you held dear to your heart what is dear to our Lord: your purity.

Pray for me that I may do the same, especially when I am tempted.

Please pray that God will give me the strength to avoid sin and say yes to a life which will lead to eternity in Heaven with you and our Lord.
Please pray also for (mention your intentions here).

As we traverse the murky waters of a society entrenched in sins of the flesh, Saint Maria Goretti is a beacon of hope in the ability of mankind to live a life of chastity. In this age of sinful sexuality, let us look to her as an extraordinary example of God’s mercy and love. By the grace of God, may we sincerely strive to emulate her saintly life:

“Those who were acquainted with little Maria said on the day of her funeral: “A saint has died!” The devotion to her has continued to spread on every continent, giving rise to admiration and a thirst for God everywhere. In Maria Goretti shines out the radical choice of the Gospel, unhindered, indeed strengthened by the inevitable sacrifice that faithful adherence to Christ demands.”