Seder Meals Are Not Catholic Practice 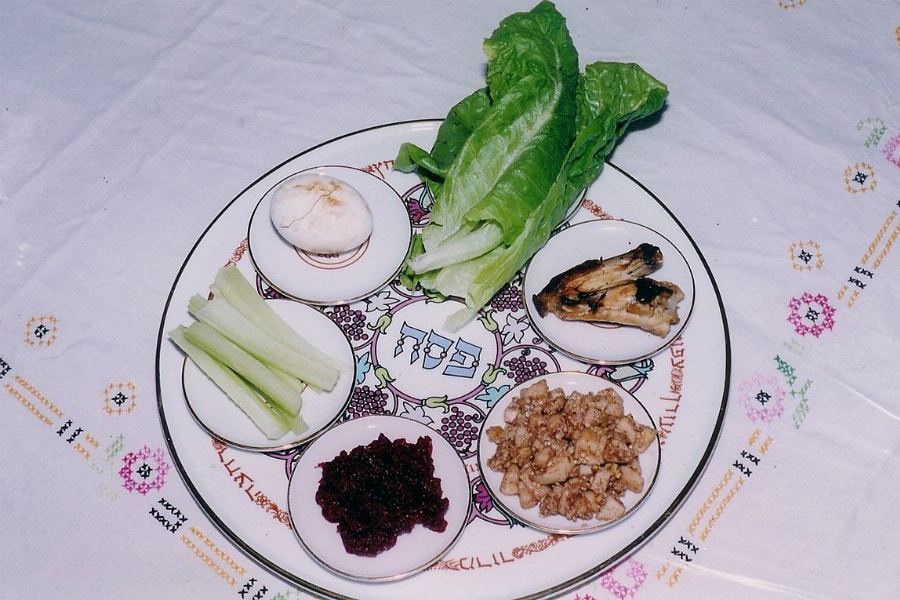 Below are some of the questions posed by readers the next day:

“This post only breeds anti-Jewish thinking and does not allow Catholics to ponder the roots of our faith, the richness of our heritage. Jesus longed to eat this meal with us and Judas did not participate at all, which tells us something.”

“I think if you are of Jewish heritage then it is not sinful to celebrate the Passover.”

“I’m confused. I grew up with a Jewish mother and a Christian father. We celebrated everything. Christmas and Hanukkah as well as occasionally Passover (it’s a lot harder to pull off successfully, so we didn’t do it every year). I was technically Jewish before I was baptized 5 years ago. I still like keeping some of our Jewish traditions alive, and teaching my kids about them as part of our history and heritage. We are actually planning to drive 4 hours tomorrow to go to my rabbi uncle’s house for Passover so my kids can experience a REAL Passover. This is something sinful? My family is expecting us. Should we cancel? Go to confession? If we have honest Jewish heritage, is that different?”

In order to address these concerns, listen as Father explains in the presentation audio cited above. In the same vein, Saint Thomas Aquinas’ Summa Theologiae  queried,  “Were the ceremonies of the Old Law, the Mosaic Law, ceased at the coming of Jesus Christ?”

The answer? Yes, the Old Law was completely fulfilled and updated, so to speak. It is important to note that, when dealing with the worship of God, our external actions must correspond with our internal beliefs. This can be further illustrated by our actions when in the Divine Presence, the Rubrics followed by priests and presenting our best selves when attending the Holy Sacrifice of Mass. With adherence to the prescribed gestures and behavior of our Faith, we exemplify our deeply held belief in God and His Church.

From Holy Scripture, we learn about the commands concerning Passover. The people are told to sacrifice a perfect year-old lamb for each household or to combine households if the members are too few. Their instructions follow:

“Take care of them until the fourteenth day of the month, when all the members of the community of Israel must slaughter them at twilight. Then they are to take some of the blood and put it on the sides and tops of the door-frames of the houses where they eat the lambs.” Exodus 12:6-7

After the prescribed days have passed, and the blood has been applied, the instructions continue. The people are to share the meat among those in their household group. All of it is to be consumed and even the manner in which it is cooked and eaten is prescribed. Woe to those who fail.

“On that same night I will pass through Egypt and strike down every firstborn of both people and animals, and I will bring judgment on all the gods of Egypt. I am the Lord.  The blood will be a sign for you on the houses where you are, and when I see the blood, I will pass over you. No destructive plague will touch you when I strike Egypt.” Exodus 12:12

Instructions for non-Jews are explicit in Exodus as well,

“No foreigner may eat it. Any slave you have bought may eat it after you have circumcised him, but a temporary resident or a hired worker may not eat it.”

What we see here is the Old Law and the old sacrificial lamb – a law that foreshadows what is to come and the coming of a new Lamb and a New Covenant that completes the old.

The practice of Seder, then, is according to the Old Law and consists of an animal sacrifice to God. Accordingly, Jesus and His family celebrated Seder during Passover. Since He was a Jew and had not yet been made a HUMAN sacrifice Himself, this made perfect sense. There was no Savior Who died on the Cross yet.

Since the Seder meal is a Jewish practice, refraining from co-opting Jewish devotions is not Antisemitic. It is the opposite. Refraining from a Jewish practice according to the Old Law prevents its practice from becoming a mere novelty. Similarly, we do not expect Jews to practice devotions according to the New Covenant. As Catholic Christians, we realize that Jesus practiced Seder as part of a family of practicing Jews. When He died for us and became the Fulfillment of Jewish law. When He had completed His own HUMAN sacrifice, He gave us a New Covenant. From that time on, we are to move forward with what He prescribed.

Therefore, the Old Law was fulfilled and the New Covenant was initiated. With His words, “Do this in Commemoration of Me“, He instituted the Eucharist and instructed us in future worship. Going back in time and celebrating what people did before the fulfillment of the law, means denying (in action) that we have a Savior Who completed the Law. Having a Seder meal may run the risk of reducing this Jewish practice to a mere novelty.

Now that Jesus has completed what the Jewish people began, we celebrate His completed law as Catholic Christians. This is because, at the Crucifixion, He fulfilled the Old Law by offering Himself as the Lamb of God – the Holy Sacrifice. He is now the Sacrifice that fulfills the Old Law. The Old Law which was a foreshadowing of Who was to come as the ultimate Sacrifice for our sins.

These thoughts are directed toward Christians who are confused about Seder. People of the Jewish faith will, obviously, have a differing viewpoint. Those whose families comprise both Jews and Christians should probably discuss their concerns with a good priest.

We Are An Easter People

We love the Jewish faith because it directly preceded and made possible the fulfillment of Christianity by Jesus. Just as Catholics do not expect the Jewish people to practice our sacraments and ceremonies, so too, should Jews refrain from condemning Catholics for no longer practicing as the Jewish people did. We are not the same, yet we are a family nonetheless. Jewish history compliments that Jesus came to fulfill the Law. There is a beauty to be found in the historical similarities we find.

In celebrating a religious practice that was relevant before Jesus saved us by His death on the Cross, we are celebrating a pre-Jesus devotion.

We are an Easter people. Our Christian faith teaches us that Jesus came ‘not to abolish the Law, but to fulfill it’. The readings of Holy Thursday clearly illustrate this. Therefore, practicing an ancient Jewish devotion, fulfilled by Jesus Himself, goes directly against the command to worship only our Triune God.

For further insight I would like to point you, dear readers, toward a Vatican document that touches on the relationship between the Jewish people and Christians (Catholics). It clearly states that our Passover differs from that of the Jews (emphasis mine):

“V. The Liturgy…2. This is particularly evident in the great feasts of the liturgical year, like the Passover. Christians and Jews celebrate the Passover: the Jews, the historic Passover looking towards the future; the Christians, the Passover accomplished in the death and resurrection of Christ, although still in expectation of the final consummation (cf. supra n. 9). It is still the “memorial” which comes to us from the Jewish tradition, with a specific content different in each case. On either side, however, there is a like dynamism: for Christians it gives meaning to the eucharistic celebration (cf. the antiphon ‘O sacrum convivium), a paschal celebration and as such a making present of the past, but experienced in the expectation of what is to come.”