Is The Salvation Army Ethical?
How Do They Stand On Abortion? 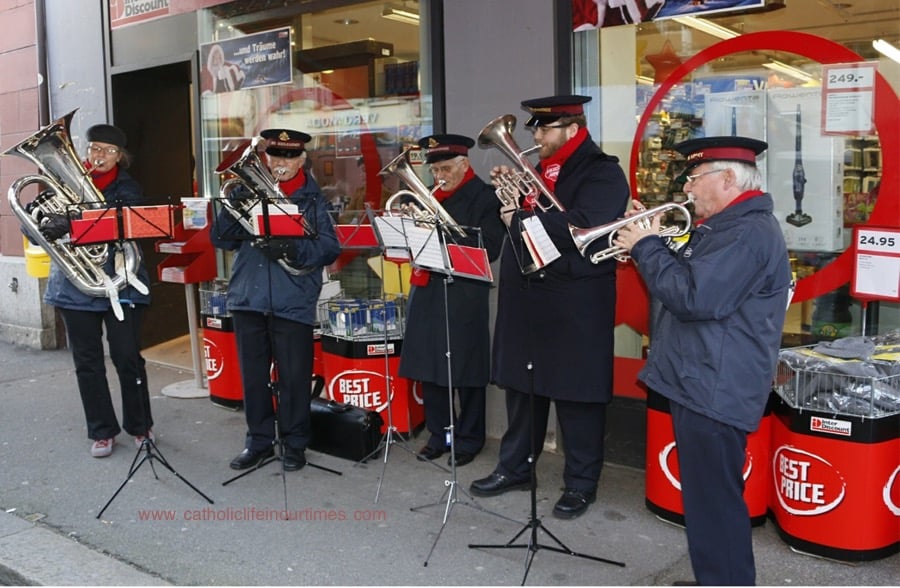 UPDATE Monday, November 19, 2018 10:45 pm: Salvation Army personnel have been told to stop posting their opinions about gay marriage, abortion or anything political on social media because it might reflect poorly on the organization, according to an internal email and guidelines obtained by the Todd Starnes Radio Show.

See bottom of page for more

Monday, November 19, 2018 7:00 am: Since Christmas appears to be making an earlier appearance than even last year, it is apparent that this post is already due. The Red Kettles of the Salvation Army are surely just around the corner.

Ring-a-ling-a-ling, the bell beckons passers by to drop their change into the red kettle of the Salvation Army (SA). Yet even charitable giving is more complex in this ever-changing world of ours. What ethical problems surface when they are scrutinized? Shouldn’t we be concerned about the destination of our good deeds?

When it comes to large organizations, it isn’t enough to blindly give. As Catholics (or any Christians, for that matter), we have a moral obligation to hold charities accountable. Since there are many options, we are capable of making a difference by giving to good, morally sound organizations. During a past year I wrote an in-depth piece outlining and providing sources to some very disturbing facts about the Salvation Army. Here, I have condensed the information in an easily read list of five:

What Is  the Salvation Army Stance on Abortion?

On the surface the beginning of the SA Positional Statement is morally sound. There is acknowledgment that all people are created in the image of God and therefore have unique and intrinsic value.  They further state that human life is sacred and everyone should be treated with dignity and respect. The Salvation Army also accepts that life beings at the moment of fertilization. So far so good.

Later, in same section, there are shocking contradictions. The Salvation Army notes that termination can occur  when “carrying the pregnancy further seriously threatens the life of the mother” or diagnostic procedures identify a fetal abnormality causing only a “very brief post natal period”. Further, rape and incest also represent a “special case for the consideration of termination”. These exceptions portray a troubling contradiction to the professed “sanctity, unique dignity and respect” due to the “image of God” found in our unborn brethren.

In order to determine collusion between the Salvation Army and Planned Parenthood, we must look at material cooperation as well as monetary support. While SA may not directly contribute to PP, there is evidence that they do partner with one another. Research by Life Decisions International has found this to be the case and has landed the Salvation Army on their Dishonorable Mention list. Further, American Life League has also found a troubling connection between the two. Simply considering “all the good they do” is not enough to excuse or waylay this compromise of pro-life principles.

As we further peruse the SA website we can also find stated support of contraception in their international positional statement:

Yikes, yet another position not in sync with Holy Mother Church! Don’t they know that oral and many other contraceptives (such as the IUD) are also abortifacients?

What Does the Salvation Army Teach About the Sacraments?

Here we find even more, compelling incompatibility. The SA is a heretical organization/church. Founder, William Booth, completely rejected the Sacraments. Although for some years he continued to follow the Protestant tradition of two Sacraments – Baptism and the “Lord’s Supper”, he held they were purely symbolic – until finally he dispensed with them altogether. In practice, many adult recruits had never been baptized – nor was it required. In the end Booth had come to the conclusion that, not only were the Sacraments not vital – they were a mistake. Therefore, in his “Foundation Deed” he abolished the Sacraments completely. This is definitely not a good match for Catholic charity.

And now for an answer to our moral Advent/Christmas alms-giving conundrum. Might I suggest a great, ethical alternative to the Salvation Army? Cross Catholic Outreach feeds the poorest of the poor in Honduras – 94.8% of your donation goes directly to these efforts. Their support of the missionary efforts of the Catholic Church in the developing world is endorsed by more than 70 U.S. Bishops. Cross Catholic Outreach is also an affiliate of Catholic Charities. Please prayerfully consider them when you make your Advent alms-giving decisions.

In closing, we should ask ourselves, “Do the good works performed by the Salvation Army outweigh their acceptance of abortion exceptions and support of contraception”? Will we look the other way instead of considering their cooperation with Planned Parenthood, support of abortifacient birth control, or their heretical beliefs? In a word, “no”. After all, there are many options for charitable service to the needy. We can easily find more worthy and life-affirming recipients for our alms. Rather than giving to a sect (SA) that has little moral common ground with Holy Mother Church, our focus should go to more suitable recipients.

*Supporting sources can be found in my post updated this year and previously published  Salvation Army – Bells for Abortion.

“A number of Salvation Army personnel reached out to me to express their concerns that the organization is embroiled in a battle between Biblical conservatives and progressives. And they fear the progressives are winning the day.

“Political or social opinions (such as hot topic issues like LGBTQ Marriage, Officer Housing, or Abortion) should not be included in profiles, and officers should refrain from posting anything that expresses a political view,” the guidelines for Salvation Army officers state.”

Why would a ‘religion’ and charitable organization feel the need to hide their moral positions regarding ethical issues, such as abortion, from the public? Personally, I find this troubling.